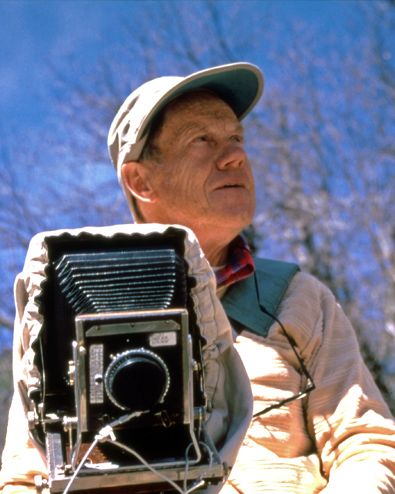 Be sure to visit current "Museum & Gallery Exhibitions" under PRESS/ EVENTS tab.

(Please scroll to bottom for caption of photo at left):

"Dear Ansel, Thank you for your thoughtfulness in sending me the portfolio by Philip Hyde, Mountain and Desert. His photography is truly exceptional. I can appreciate the pride you must take in his achievements.... You can be sure his interests and talents will be given every consideration for inclusion in forthcoming interpretations of our Nation's parks and wildlands." -- President Gerald R. Ford, 1975

“Philip Hyde has a rare feeling for the medium of photography. I consider him one of the very best photographers of the natural scene in America.” -- Ansel Adams, 1971

“Dear Phil, you have a noble project outlined for the Bender Grant. I will sponsor you gladly. If I have stimulated you, I have fulfilled my mission, or part of it. Seeing your work makes me feel sure that you will successfully digest any influence—good or bad.” -- Edward Weston, 1949

“Dear Philip, Your pictures are as clean as Ansel’s, with a slant of your own seeing. You are starting your career as few of my students have done. In a way I envy your present mastery of the medium...” -- Minor White, 1950

“Philip Hyde inspired many of the ‘Who’s Who’ of landscape photography working today. More than anyone else, he encouraged outdoor photographers to use their work for environmental causes.” -- Jack Dykinga, 2009

“Philip Hyde was the workhorse for the Sierra Club book series… The success of the Sierra Club books not only gave a great boost to its own membership, but also showed publishers that such books had commercial value, thus spawning the publication of thousands of books modeled after them… I have little doubt that every published nature photographer of my generation has been inspired by Philip’s efforts… Even those not familiar with the full extent of Philip’s accomplishments can trace their roots to his efforts.” – William Neill, 2006

"Philip Hyde, following Ansel Adams and Edward Weston, is one of four or five great photographers of the Western landscape..." -- Allan Dyson, 2002

“Not even Ansel Adams applied his images to environmental protection issues as diligently as wilderness photographer Philip Hyde.” -- Lewis Kemper, 1989

"I remember Philip Hyde and his tripod atop a sandstone needle in Chesler Park (Canyonlands).... The long immobility as he waited for the right light, the exact moment. And when it came, from under the hood of his view camera, he brought forth a piercing yodel. a direct response to a moment in time. A strong, colorful statement." -- Edward Abbey, from Slickrock, 1971

“Philip Hyde has been one of our mainstays in letting people know the mood and feel of America’s special places... Philip Hyde first put his camera to work for America's scenic resources in the battle to keep dams out of Dinosaur National Monument. His ability to interpret what goes on in wilderness has helped save Point Reyes National Seashore, Grand Canyon National Park, High Sierra wilderness, the Big Sur coast, the North Cascades of Washington, the Volcanic Cascades of Oregon, the California Redwoods, the Wind Rivers in Wyoming. His list is impressive and growing.” -- David Brower, from the Foreword, Navajo Wildlands, 1967

“Philip Hyde, a superb photographer and great writer, left behind a luminous legacy that will continue for generations. With students, Philip provided not only good information, but more importantly, he had the ability to inspire those around him, to encourage them to look beyond the surface of the object with their photographs.”

“Philip Hyde was more interested in saving wilderness than in promoting himself, unlike some of the other photographers in the Sierra Club.” -- Martin Litton, 2007

"With the ability to clearly communicate a deep reverence for the natural scene, Philip Hyde used his heart and mind to produce an enduring wealth of photographic expression that remains integral to the Group f.64 legacy." -- Huntington Witherill

"Ansel showed you what he wanted you to see. Philip showed you what was really there. He is considered one of the foremost of his kind, using landscape photography for political efforts.... There was no effort to manipulate the imagery, and he did it with class." -- Al Weber, 2006

Philip Hyde's work was inspiring to me when I began to discover the American West. The beauty and fragility of the western landscape became as powerful a force in my life as anything I had known before. --Guy Tal, 2010

“Ansel Adams is better known, but Philip Hyde — even more than Eliot Porter — became our model for committing a career and a life to conservation through color photography.” – Stephen Trimble, 2006

“Philip Hyde’s lifestyle, ideals and what he stood for would have made a lasting impression on me even if he was not a photographer, though his photographic contribution impacted a generation of photographers.” -- Carr Clifton, 2010

"Philip Hyde's photography was understated and without the cliches of sunsets and saturated colors. Understatement is the hardest thing to do in this over-stimulated age." -- Dick Arentz, 2009

“Philip Hyde has a fine sense of composition, he is a naturalist at heart and he is an artist. Take these outstanding qualifications and add his deep and abiding interest in the conservation of natural resources and you have an extraordinary man who is a most valuable ally in any program worked out for the protection of wilderness areas in this country.” – Horace M. Albright, 1956

"Philip Hyde has the outstanding ability to interpret through a lens the qualities in native landscapes. His photography is most effective in molding public opinion supporting the preservation of wilderness integrity against the march of utility."

“I have the greatest respect for Philip Hyde as a truly creative photographer. He is devoted to the many aspects of conservation, and his photography is exactly suited to this important subject. I have never met anyone who so thoroughly knows his art and also knows what he wants to do with it.” -- Ansel Adams, 1952

Photograph on the left: "Philip Hyde With 4X5 Baby Deardorff at Home" by Steve Dunsky who visited to make a motion picture interview the same day circa 1986.